December and January have seen great progress in our vision to remove the Tigray and Amhara from the list of unreached peoples.

The believers in Addis Ababa have formed into three home churches. From Lou: 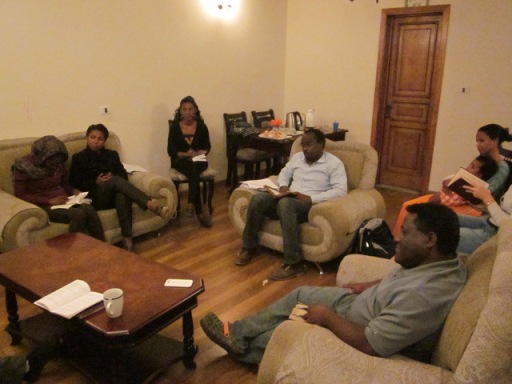 A home church in Addis

Lou and Genet have also been making rounds in Bahir Dar and Kosober in the North, meeting with home church leaders, attending home church meetings and making new contacts. More from Lou:

I was in Bahir Dar last week visiting the work there. I was present in a meeting of home church leaders for all the eleven home churches. They were giving status updates on their home churches and also presented challenges they have encountered. It was very exciting not only to hear about how many new people visited and how many accepted Christ, but also to hear them describe real challenges they face and how they are trying to solve them on their own. Overall in the last three months in all the eleven home churches six new people came to Christ and as many as twelve new people visited for the first time. It is remarkable. [December 22, 2013]

A meeting in Bahir Dar

Another place where God is doing a great work is the city of Kosober. It is located about 100km southwest of Bahir Dar. The home church started this year after our last training in February. A couple came to our training and went back and started a home church in their home. In August when we were still in the states their number was seven. In the last four months or so they got some help from another couple who moved there from a nearby town and currently there are 17 people meeting in two home churches. [December 22, 2013]

A home church in Kosober

We just concluded our retreat today. I am still in Bahir Dar. I will be heading back to Addis Thursday. We had a great retreat time. God really used this time to bring us even closer. We got to discuss our strategy in detail and came out with a workable plan to plant home churches in new places as well as strengthening the existing ones… The elders got to see the way forward and are very excited about it. Thank you all for praying. It was an answer to our prayers. [January 28, 2014]

The ministry is moving along at a formidable pace.  Praise God. Please help the work by praying.